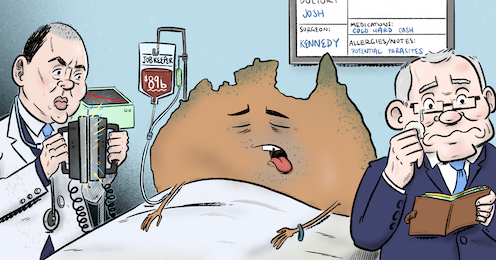 To the critics, the Treasury has just marked “its own homework[1]”.

It has produced a 60-page report entitled Insights from the first six months of JobKeeper[2].

Commonwealth Treasury, October 11, 2021[3] And it finds the A$89 billion program it designed and delivered held up pretty well last year at the time Australia needed it most. As with the Labor government’s economic rescue programs during the global financial crisis, there are critics claiming it was wasteful, this time from the Labor side of politics[4]. But they’ve exceedingly short memories. In the first week of March 2020, Australia had 93 COVID-19 cases and three deaths. The prime minister said he was “going to the footy[5]” and “looking forward to it”, at a time when medical experts were calling for people to do no such thing and a quarter of Italy was locked down. Italian tourists were coming in freely. We were sleepwalking into a calamity. The way we were On March 10[6] last year, I wrote that we needed to close our international border totally and immediately, and spend about $100 billion to support workers and business while we shut down the economy and got health measures in place. On March 20[7] the borders were closed. Treasury forecast that if we had to lock down as hard as Italy or Spain our economy (GDP) would collapse by 24%. That wouldn’t be a mere recession or even a depression. It would be economic and financial Armageddon. The government needed to plug an unimaginable hole quickly. And it did. Read more: The key to the success of JobKeeper is retrospective paid work[8] JobKeeper provided six months of financial support to businesses who expected their revenues to drop. At the time, that was almost every business in the country. It was designed to be easy to understand, and to get money onto business and household balance sheets immediately. Most importantly, it was designed to give recipients certainty in a time of calamitous uncertainty. These are facts. They are undisputed. What the critics say now From the safety of the present day, critics point out that JobKeeper excluded certain industries and workers: short-term casuals and universities among them. And they say $19.7 billion went to businesses whose revenues increased in the three months they received the payment. Read more: Quick, dirty, effective: there was no time to make JobKeeper perfect[9] It would have been better, they say, not to spend the money on businesses that turned out to have rising revenues, and it would have been good to include short-term casuals and universities. JobKeeper should have included a “clawback” provision, they say. They are right. It would have been better had it been designed in that way. But they are taking insufficient account of what things were like at the time. What things were like then The context for the development of JobKeeper was a once-in-a-century event, with a government in power whose entire political brand had been railing against “debt and deficits”. Economists were concerned the government might do too little, or nothing at all. There are the things worth noting: Treasury had to act incredibly quickly, in a matter of days. I like an academic seminar as much as the next person, but Treasury didn’t have the luxury of years of work, refinement and debate. It had to perform battlefield surgery. A key reason so many businesses were able to increase revenues after JobKeeper began was that it was so effective. A smaller scheme, with more requirements and red tape, would have meant fewer workers and business would have got support, leaving the whole economy worse off. The more carve-outs and exclusions from JobKeeper the less effective it was likely to be. Fine-tuning rules creates uncertainty. It provides scope for gaming[10] (getting around the rules). If we want public programs to have force, they need to be simple. The real choice in March 2020 was JobKeeper as it was or no JobKeeper at all. We saved the patient In early March 2020 the Australian economy was critically ill . Doctors Josh Frydenberg (Treasurer) and Steven Kennedy (Treasury Secretary) saved the patient. That’s what matters. Did they use ECG machines, blood bags, gauze and stitches? You bet. Did it cost economic resources? Probably, although had the worst had happened even more resources might have been used. Insurance can look wasteful after the fact, but that doesn’t make it unwise. Read more: The GFC provided the sauce we used to ward off the COVID recession[11] I am glad they erred on the side of too many stitches rather than too few. They provided the only thing that can really help in times of extreme uncertainty, which is certainty. References^ its own homework (www.afr.com)^ Insights from the first six months of JobKeeper (treasury.gov.au)^ Commonwealth Treasury, October 11, 2021 (treasury.gov.au)^ Labor side of politics (www.andrewleigh.com)^ going to the footy (parlinfo.aph.gov.au)^ March 10 (research.economics.unsw.edu.au)^ March 20 (www.pm.gov.au)^ The key to the success of JobKeeper is retrospective paid work (theconversation.com)^ Quick, dirty, effective: there was no time to make JobKeeper perfect (theconversation.com)^ gaming (research.economics.unsw.edu.au)^ The GFC provided the sauce we used to ward off the COVID recession (theconversation.com)Authors: Richard Holden, Professor of Economics, UNSW