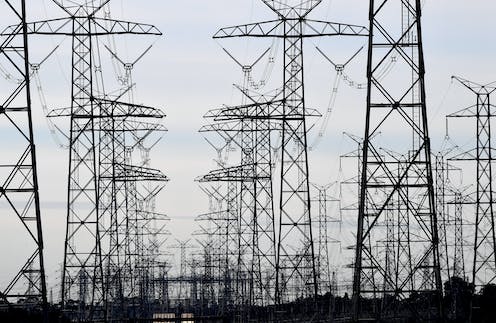 If you’re like most Australians, the single biggest chunk of your energy bill — about 40% — goes to a network services company, which owns and operates the transmission lines or pipes delivering electricity or gas to your home.

But evidence from takeover bids for Australia’s last two publicly listed electricity network services companies suggests you are paying more than you should.

These prices are set by the Australian Energy Regulator, because network services are monopolies: you can choose your energy retailer, but not the lines or pipes through which the electricity or gas flow.

It’s the regulator’s job to determine a fair price for these services — one that doesn’t shortchange the service provider or gouge consumers[1].

But the Australian Energy Regulator has not been getting these pricing decisions right, according to calculations that can be made using the bids by overseas investors for AusNet Services Ltd[2], the biggest energy network provider in Victoria, and Spark Infrastructure Group[3], whose assets include South Australia’s electricity distribution network.

Being listed on the stock exchange, they must disclose financial information. This information enables analysts to calculate how much investors value them compared to the Australian Energy Regulator.

This calculation — known as Regulated Asset Base (RAB) multiple — suggests the regulator has been allowing energy network companies to charge way more than necessary.

AusNet owns and operates almost all of the electricity transmission system in Victoria, and also big gas and electricity distribution networks. It is the subject of a takeover battle between Brookfield Asset Management, a Canadian infrastructure fund, and APA Group, Australia’s largest natural gas infrastructure business.

On September 20, it was revealed that Brookfield offered to acquire AusNet for A$2.50 a share. The day after APA Group offered a mix of cash and equity that it said valued Ausnet at A$2.60 per share.

These bids provide a baseline to calculate the Regulated Asset Base multiple: the the ratio of investors’ valuation to the regulator’s valuation.

How much an investor is prepared to pay for a share indicates their expectation of the future dividend (or profits) those shares will return. How much the regulator’s allows a company to charge is based on what it sees as a fair return to shareholders.

From this information the Regulated Asset Base multiple can be calculated.

Brookfield’s offer, according to The Australian Financial Review[5], gives Ausnet a multiple of 1.68. This suggests the Australian Energy Regulator is allowing AusNet to charge prices 68% higher than Brookfield would be happy to accept. APA’s bid suggests a RAB multiple even higher.

In August, Spark’s board approved a A$5.2 billion takeover[6] offer from US private equity giant Kohlberg Kravis Roberts and the Ontario Teachers’ superannuation fund.

This offer gives Spark a RAB multiple of 1.5[7]. This suggests the monopolies Spark has a share in are charging prices 53% higher than needed to adequately compensate investors

Read more: You're paying too much for electricity, but here's what the states can do about it[8]

The impact on customers will vary, but these calculations suggests network services charges should be about two-thirds current levels. This would make household electricity bills about 15% lower than now.

I am not suggesting the regulator should set prices consistent with a RAB multiple of 1. But prices should not favour monopoly owners as much these takeover valuations suggest they do.

The underlying issue here is not new. Official inquiries over the past decade — the Garnaut Climate Change Review update[9] in 2011, the Senate inquiry into energy bills in 2012[10] and the Productivity Commission’s review of electricity network regulation in 2013[11] — all concluded energy regulation erred excessively in favour of investors at the expense of consumers.

Yet the problem remains — and if these takeovers are successful then AusNet and Spark Infrastructure will almost certainly be delisted. We will then lose vital information on RAB multiples that allows objective assessment of the regulator’s decisions.