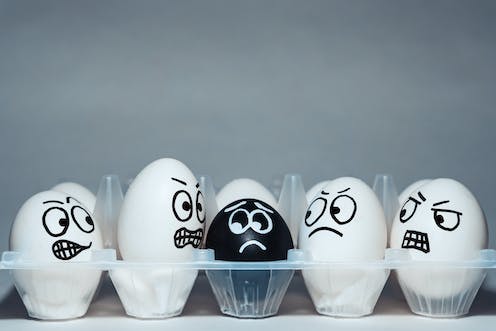 While this sounds fine, it can be problematic in offering the perpetrators an out[2].

Unconscious bias is bias we are unaware of[3]. It is said to be outside of our control. Training to recognise it has become widespread. Starbucks recently closed[4] 8,000 stores in North America for unconscious bias training after one of its managers called police to arrest two African-American men who had been sitting at a table but not ordering while waiting for a friend[5].

But training to recognise something can also normalise it[6]. Unconscious bias training, in effect, side-steps accusations and blame, by creating the impression that everyone is biased, making it possible for people to avoid being accountable for their biases and biased behaviour[7].

The concept of unconscious bias emerged from the field of social psychology during the 1990s[9]. It is commonly associated with an Implicit Association Test[10] that asks people to assign an adjective such as “pleasant” or “unpleasant” to an entire group, such as males or females or blacks or whites. The speed with which people assign the adjective is said to measure the strength of the association.

The test had reportedly[11] been taken over 17 million times by 2015. It has helped legitimise a link between unconscious bias and discriminatory behaviour, even while scholars question its assumptions and the reliability[12].

Of more serious concern is that it legitimises bias[13] by spreading the idea that most people are biased.

Read more: What's unconscious bias training, and does it work?[14]

The concept made its way to American employment discrimination lawsuits in the 1990s. The idea that it was possible to unconsciously discriminate removed the need to prove an intention to discriminate and increased the possibility of successful claims.

But Australian discrimination law has never required proof of intention. Here, it is illegal for employers to discriminate or allow harassment, regardless of what they intended[15].

Australian workplace health and safety laws operate on the same principle. It is illegal for someone with a duty of care to be reckless without a reasonable excuse[16].

Yet despite the workings of our law, Australian organisations have embraced the concept of unconscious bias[17] with almost as much fervour as the Americans, and are spending immense amounts of money on training to recognise it.

The goal of reducing discrimination is, of course, laudable. But attributing bad behaviour to unconscious causes deflects blame away from the perpetrators, and also away from the organisations themselves.

They can market themselves as “valuing diversity[18]” while blaming discrimination on employees and managers who ‘fail to learn’.

The alternative would be to actively use performance management and disciplinary systems to ensure discrimination didn’t take place. And to make sure the law didn’t permit it.