This success is interesting given recent conversations and media coverage around plastic bag bans[3] and reducing packaging in retailing[4]. But campaigns such as these are linked with the psychology about why some of us love to collect and why some items become collectable.

Consumer behaviour theory[5] explains that products become special, and therefore collectable, for a number of reasons including their symbolic value, mood-altering properties or instrumental importance.

Read more: What makes us sign up to subscription boxes[6]

Objects get symbolic value when they remind us of particular places, events or people. Souvenirs from a holiday or a Christmas ornament from a family member, for instance. Objects may also be special because they have utilitarian or financial value.

When everyday, seemingly mundane items are part of a collection, they transform from the profane to the sacred. Often this special significance is incomprehensible to the outsider, as it does not necessarily relate[7] to the monetary value.

How and why collectables work

The way collectable promotions generally work is that a customer must spend a minimum set amount, say $20, to receive a “blind bag” with a collectable. And therein lies the key – the blind bag. The opaque packaging means consumers never know what they’re going to get.

This draws on reinforcement theory[8] - the blind bag provides the excitement of receiving a reward. But the reason the bag is “blind” is to encourage repeat purchases. 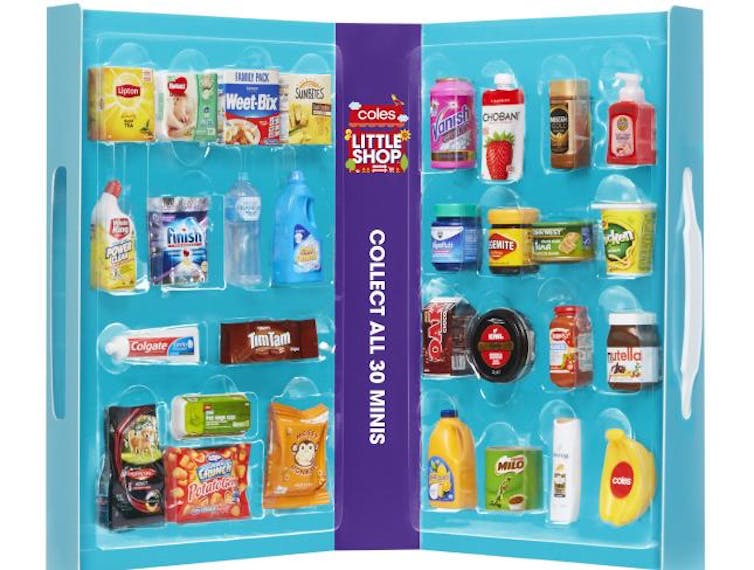 Intermittent reinforcement[9] is the most effective in producing desired behaviours. In other words, if shoppers know the item they’re going to receive, the excitement is diminished because the outcome is certain.

On the other hand, when the outcome isn’t certain, each individual blind bag purchase has the potential for providing an immediate dopamine rush. This is the same principle that leads to gambling addiction[10].

After the blind bag is opened and the immediate reward over, it’s replaced by the longer term satisfaction from adding to the collection.

A collection becomes special as it’s added to an “extended self[11]”. That is, special possessions become part of our identity and signal to others both who we are and who we want to be. In that sense, our collections are a part of us and our life story, and the act of collecting holds a certain comfort for the collector.

Read more: When stuff gets in the way of life: hoarding and the DSM-5[12]

While many collections are made up of common items such as toy cars or stamps (the profane), there are also those who collect very unusual and uncommon items (the sacred).

There are collections of items that are so rare they become particularly special and coveted, for example, items worn by celebrities, items of historical importance, rare artefacts and so forth.

But in terms of consumer psychology, profane items often end up becoming sacred to the collector. They become part of the consumer’s identity and their history.

There is genuine pleasure here the clever retailer is deliberately tapping into.

An ever more common strategy

Coles’ Little Shop collectables are just the latest of a number of collectable promotions run by large supermarkets and fast food giants.

McDonalds have run similar promotions for many years, with Happy Meals featuring licensed products usually tied into new movie releases or pop culture. Many of these items end up for sale online with ‘vintage’ pieces commanding very high prices.

Despite the success of recent collectable campaigns, retailers need to be mindful that sometimes these promotions can backfire.

Woolworths received criticism[16] from customers expressing frustration at not being able to complete their Marvel disc sets.

In this case the supermarket giant was accused[17] of “rigging” the promotion by making one or two of the discs especially scarce and difficult to obtain.

In America, there’s even a case of customers themselves rigging promotions. In an intriguing story the FBI were called[18] to investigate the case of a McDonald’s Monopoly game promotion in which US$24 million was allegedly swindled by a network of operators.

But we’re not likely to stop collecting any time soon, and given retailers are aware of the psychology behind collecting, we can expect to see many more of these types of promotion.