Crown Towers Sydney, at 75 storeys, is now the city’s tallest building. It should not exist, and certainly not where it is – in prime location on Sydney’s famous harbour.

The redevelopment of the 22-hectare Barangaroo precinct was supposed to transform the former docklands into a world-class example of architectural and public domain design.

But giving Crown Resorts the go-ahead to build its skyscraper – containing a casino, hotel and luxury apartments – diminished the space set aside for parkland in the original concept plan[1] and broke height limits.

This week the ABC’s Four Corners[2] program shed light on how the tower got approved, beginning with a 2012 lunch facilitated by radio celebrity Alan Jones between Crown Resorts’ majority shareholder James Packer and then NSW premier Barry O'Farrell.

It is a familiar story of a culture of wealthy mates and backroom deals. It is also a story about the novel use of an obscure infrastructure approvals mechanism called “unsolicited proposals” – or USPs for short – that circumvented established processes intended to protect the public interest.

The Barangaroo tower has not just changed Sydney’s skyline. It has changed the whole planning system. 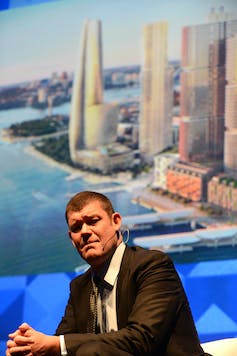 James Packer with an artist’s impression of his Crown Casino Barangaroo development proposal at a business function at the Sydney Opera House, May 16 2013. Dean Lewins/AAP

As the Four Corners program related, in February 2012 Packer (one of Australia’s ten wealthiest individuals) asked his friend Jones to organise a meeting with O’Farrell.

In Jones’ penthouse suite overlooking Sydney’s Circular Quay, they ate pies and mash[3] while Packer outlined his vision for a A$1 billion-plus hotel, casino and entertainment complex.

How did Packer’s plan fit into the concept that won Hill Thalis Architecture[4] the international design competition for Barangaroo? It didn’t.

O'Farrell, Jones said[5], pointed to the rigours of NSW’s urban planning process as a barrier to Packer’s idea. The premier “made the point that it wouldn’t be all that easy, but he embraced the vision”.

Packer went public with his vision shortly after. Many objected. Then:

With Packer’s project still facing significant opposition, Premier Barry O’Farrell came up with a novel solution which he proposed at another private meeting in his office. The solution was to use an obscure government policy called the “unsolicited proposals” process.

The Productivity Commission has defined[6] an unsolicited proposal as a public-private infrastructure project initiated by a private party, not in response to a request from government.

Common to all guidelines for considering such a proposal is “a requirement for uniqueness or innovation” – with uniqueness implying no other party could reasonably deliver the project for the same value for money in the same time.

But as Serena Lillywhite[7] of Transparency International Australia told Four Corners: “If it’s a project that is considered to be unique and on such a large scale, then it should be going to an open tender process.” 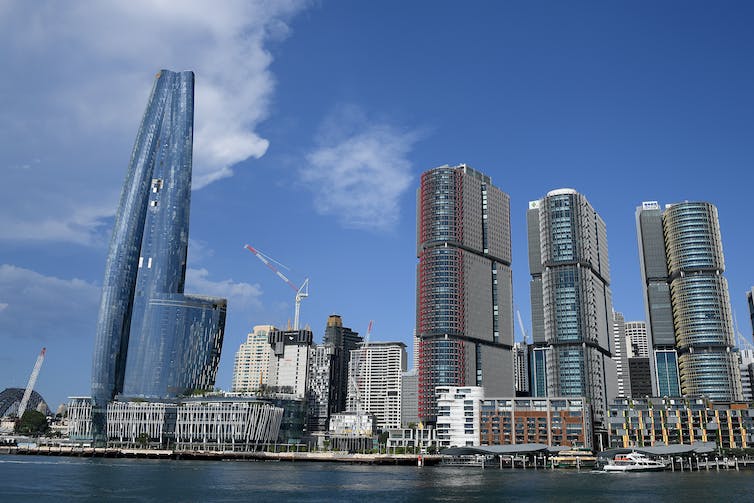 The Barangaroo development as seen from the west. Instead of more parkland for locals, a casino and hotel meant for wealthy tourists. /Dan Himbrechts/AAP

Part of the urban planning landscape

We’ve studied unsolicited proposals as part of our research[8] into how planning systems have changed since the 1990s and the implications for public participation and social justice. We’ve been involved in several studies in Sydney’s Millers Point[9] and Barangaroo[10] since 2014.

Since the process was adopted to greenlight Packer’s plan for Barangaroo, unsolicited proposals have become a well-used tool to circumvent the standard approval processes for urban planning in Australia.

The concept has spread to Victoria and Western Australia, where they are called “market-led proposals[11]”, and Queensland[12], where they are also known as “exclusive mandates”.

Read more: Market-led infrastructure may sound good but not if it short-changes the public[13]

The concept is also spreading internationally[19] as a means to connect global money to local infrastructure projects. 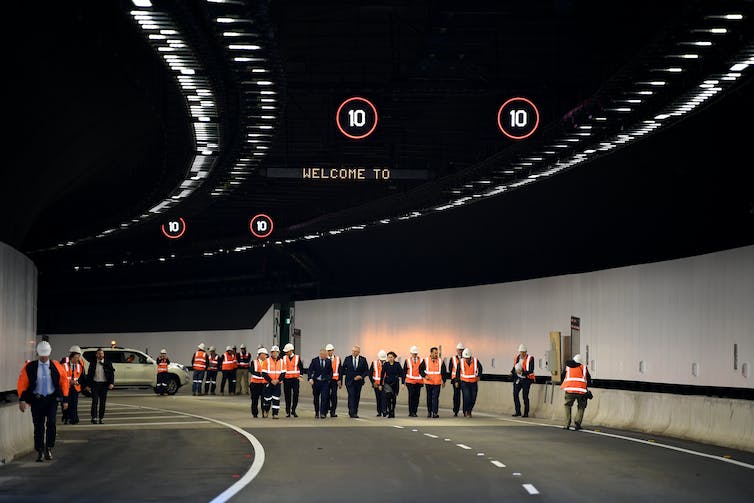 One bureaucrat who has worked on unsolicited proposals described the process to us. After the initial proposal is made, discussions go on behind closed doors and “some sort of contribution is cooked up”.

Contributions could include a commitment to provide infrastructure or a fee to government by the proponent.

For example, Macquarie Group will “deliver the new metro station, retail space, and pedestrian connections” at Martin Place[20] in exchange for approval to build its towers.

In the case of Crown Resorts’ Barangaroo deal, the promised contributions included guaranteed future taxation revenue and “an upfront licence fee of $100 million[21]” for the state government.

We are not suggesting these negotiations and contributions are corrupt. From a transparency perspective, however, they are concerning. The public does not know the exact nature of the relationships involved, nor the financial details of what (in the words of our bureaucrat) is being “cooked up” and whether they are value for money.

These negotiations happen, as another insider put it, “in a very black box […] no one knows what happens there”.

Baked into the system

Urban planning academics[22] and multiple agencies with oversight on public finances and integrity have flagged this as problematic.

In 2016 the Audit Office of NSW urged greater transparency and public reporting[23] of unsolicited proposals, warning they “pose a greater risk to value for money than procurements done through open, competitive and transparent processes”.

In 2018, the Australian Competition and Consumer Commission criticised state governments[24] for accepting unsolicited proposals for tollways, warning the lack of competitive tender processes would inflate costs for taxpayers.

The Victorian Auditor-General made similar warnings in 2019[25].

The Barangaroo casino has yet to open, as NSW’s Independent Liquor and Gaming Authority ponders if Crown Resorts (also being scrutinised by royal commissions in Victoria and Western Australia) is fit to hold a gaming licence.

Read more: It's hard to see how Crown Resorts can be found 'fit and proper' to run Sydney's Barangaroo casino[26]

As Shaun Carter[27], former NSW president of the Australian Institute of Architects, told Four Corners: “We should look at that building and forever know that we should never let that happen again.”

But with unsolicited proposals being baked into the system, the likelihood is that it will happen – again and again.