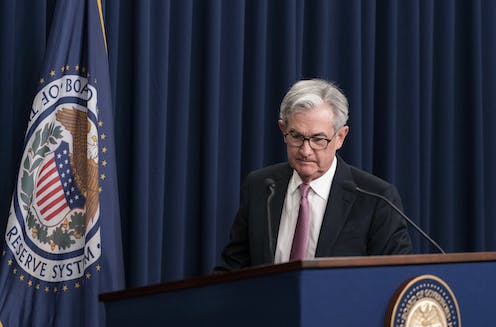 The Federal Reserve on May 4, 2022, lifted its benchmark interest rate[1] by half a percentage point to a range of 0.75% to 1%, its biggest increase in 22 years[2]. The aggressive move, which has been expected for many months, is part of the U.S. central bank’s effort to slow the fastest inflation in 40 years[3]. More rate hikes are forecast in the coming months[4].

Economists, financial markets and others are concerned[5] that rising rates could send the economy into recession. Even worse, some worry higher rates could lead to what’s known as stagflation.

But how does the Fed get rising consumer prices under control, can it avoid the dreaded R word – recession – and what the heck is stagflation? In recent weeks, we’ve asked several experts to explain these complex topics to help readers better understand what’s at stake as the Fed takes on its biggest inflation fight in two generations. Here are excerpts from three of those articles.

The Fed’s main monetary policy tool is the federal funds rate, which acts as a benchmark for every other interest rate in the U.S. economy – from borrowing rates for mortgages to business loans. It also helps determine many other rates around the world.

When it goes up – or is expected to – consumers and businesses end up paying more to borrow for a new home or build a factory. As a result, they buy less stuff and make fewer investments[6], slowing the economy, explains Rodney Ramcharan[7], who has studied how monetary policy affects the economy for decades while working at the Federal Reserve, the International Monetary Fund and now the University of Southern California.

But with inflation running at 8.5% year over year, “no one really knows how high interest rates might need to climb in order to get inflation back down” to the level the Fed prefers, around 2%, he adds.

The prices of most meat and other products have been soaring lately. AP Photo/Charles Krupa[9]

And there’s the rub.

The Fed says it’s serious about taming consumer prices and believes it can execute what’s known as a “soft landing,” in which inflation slows down without seriously damaging the economy.

But the higher rates go, the more economic activity will slow. If you ask Alex Domash[10] and Lawrence Summers[11] of the Harvard Kennedy School, they’ll tell you it’s already too late[12]. Based on their analysis of 70 years of efforts to do so, the Fed probably can’t prevent a recession.

“The history of engineering soft landings is not encouraging,” Domash and Summers write. “We found that every time the Fed has hit the brakes hard enough to bring down inflation in a meaningful way, the economy has gone into recession.”

Read more: Fed hopes for ‘soft landing’ for the US economy, but history suggests it won’t be able to prevent a recession[13]

[You’re smart and curious about the world. So are The Conversation’s authors and editors. You can read us daily by subscribing to our newsletter[14].]

That brings us to the nightmare scenario. What if the Fed successfully slows the economy but fails to meaningfully reduce inflation?

“The problem is that the ways to fight either one of those two problems – high inflation, low growth – usually end up making the other one even worse,” she writes. “And that means solving the problem may simply depend on circumstances out of U.S. policymakers’ control, such as an end to the crisis in Ukraine or finding ways to immediately increase oil supply – which is tricky.”

It’s too soon to say whether the U.S. economy will experience stagflation, but it’s certainly on the minds of Fed policymakers.

Read more: Why stagflation is an economic nightmare – and could become a real headache for Biden and the Fed if it emerges in the US[17]

Editor’s note: This story is a roundup of articles from The Conversation’s archives.