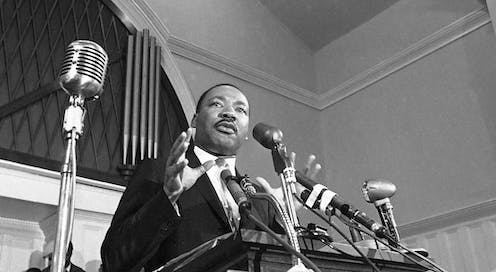 How should wealthy people respond to daunting problems like racism, economic inequality and climate change? Leading thinkers have long questioned whether philanthropy offers appropriate or meaningful solutions to vexing challenges.

Eighteenth-century philosopher Mary Wollstonecraft[1] called private giving “the most specious system of slavery.” Wollstonecraft saw charitable and philanthropic efforts as softening the effects of unjust laws and political institutions – rather than dismantling them.

A century later, the poet and playwright Oscar Wilde argued[2] that private giving “creates a multitude of sins.” Wilde thought that charity “degrades and demoralizes” while preventing the horrors of systemic injustice from being recognized by those who suffer from it.

Civil rights leader Martin Luther King Jr.[3] held that philanthropy is “commendable[4]” but insufficient in the face of challenges like war, racism and poverty. “True compassion,” King wrote, is “to see that an edifice which produces beggars needs restructuring.”

As a political philosopher who studies the ethics of philanthropy[5], I see these claims as part of a long tradition of criticism of private giving. In my new book[6], “The Tyranny of Generosity: Why Philanthropy Corrupts Our Politics and How We Can Fix It,” I view these critics as questioning what I call “palliative philanthropy.”

Like palliative care in medicine[7], which eases pain without curing the disease that causes it, palliative giving strategies address the symptoms of injustices while leaving their causes to fester. Critics claim that donors often fall into this trap.

Many donations have other goals

This critique invites some immediate objections.

To be sure, much philanthropy responds to missions other than helping the poor and ending inequality. Thousands of nonprofits seek instead to supplement research funding, preserve cultural heritage or expand opportunities for artistic enrichment.

And it’s generally harder to see how philanthropy with scientific, cultural or artistic missions might serve as a Band-Aid or become counterproductive, versus, say, donations tied to ending hunger or supplying mosquito nets[9] to reduce the incidence of malaria.

Another question is whether the notion that charitable giving is merely palliative applies equally when philanthropists try to tackle the root causes of society’s deepest problems.

That’s a common goal of U.S. philanthropy[10]. For years, its leaders have embraced the notion that donated funds can facilitate systemic change[11] in everything from financial exclusion to human trafficking.

Since laws and policies create and regulate institutions, transforming unjust institutions requires fundamental alterations to these laws and policies. As University of Chicago philosopher Brian Leiter[12] puts it[13], “[H]uman misery has systemic causes, which charity never addresses, but which political change can address; ergo, all money and effort should go towards systemic and political reform.”

For Queen’s University philosopher Will Kymlicka[14], an individual’s primary obligation in the face of injustice is to mobilize politically[15] to press for just institutions.

Donors, in other words, should spend less on providing people in need with the goods and services they require. And they should spend far more on political campaigns, lobbying, legal action and policy advocacy, even when this might mean forgoing the tax breaks[18] tied to conventional charitable gifts.

Sometimes root problems get in the way. Chn Ling Do Chen Liang Dao/EyeEm via Getty Images[19]

Educational reform as a cautionary tale

As I argue in my book[20], Leiter and others critical of palliative giving should be careful what they wish for.

The difficulty is that the solution risks substituting one form of injustice for another. Under conditions of extreme economic inequality, encouraging donors to spend more on efforts to reform laws and policies risks exacerbating political inequality and undermining democracy.

Members of a political community inevitably disagree about why and how their institutions should be designed or reformed. A central demand of democracy is that subjects of these political decisions ought to enjoy equal opportunities for influencing them. Allowing advantages in economic or social status to be exchanged for greater political power conflicts with a commitment to treating one another as free and equal members of society.

The movement for K-12 education reform[21] in the United States, funded by billions of dollars annually[22] in charitable contributions, illustrates this point.

In the late 1990s, several foundations coalesced on an education agenda that emphasized market principles, such as choice, competition and performance-based evaluation.

This consortium went to work[23] on creating and coordinating advocacy groups, lobbying and electing sympathetic officials, creating parallel school systems, and even offering funds directly to cash-strapped public agencies to carry out the reform agenda.

The general public, however, wasn’t asking for any of this[24]. Most Americans are satisfied with the educational system[25], polling indicates, with many wary of charter schools and other market-oriented educational reforms[26].

But since opponents of the reform agenda can’t compete with the resources of its supporters, including the Bill & Melinda Gates, Walton Family[27] and Eli and Edythe Broad foundations[28], reformers have largely dominated the policy agenda. As a Gates foundation official explained[29] to policy scholar Megan Tompkins-Stange[30] in a 2016 book, “We have this enormous power to sway the public conversations about things like effective teaching or standards and mobilizing lots of resources in their favor without real robust debate.”

A common line of criticism[31] says that the problem with donor-led education reform efforts is the mixture of grand ambitions with limited knowledge of what really works in education. After decades of this philanthropic trend, the U.S. still ranks well below most of its peer[32] countries in terms of global education benchmarks.

I believe that big donors should also learn from this experiment that the financial ability to address a major social problem doesn’t justify bypassing or overwhelming public debate. Even if such efforts achieve their intended effects, they damage democracy and mistreat fellow citizens.

Being a democratically responsible donor

How can big donors balance ambitions to correct injustice with the constraints on power that democracy requires?

One option is for donors to embrace the aim of political change but avoid dominating the agenda.

They can support nonpartisan community organizing[33], which helps disconnected individuals identify and collaborate on shared challenges. Progress on systemic problems, including strides toward protecting civil rights, workers’ rights and the outlawing of redlining[34], all began with community organizing.

A second option is to single out advocacy campaigns that counterbalance powerful special interests that have already skewed the debate.

For instance, donations supporting advocacy that leads to restrictions on tobacco marketing might be justified to counteract the lobbying efforts of tobacco corporations[35]. Likewise, donations that support environmental activism could reduce the influence of oil, gas and coal companies[36] on climate change policies.

A third option is to invest in temporary policy experiments[38] that can be authentically adopted and controlled by democratic governments.

It’s perhaps best exemplified by the partnership between U.S. businessman and philanthropist Julius Rosenwald and prominent Black educator and leader Booker T. Washington to seed-fund the construction of 5,000 schoolhouses in the 1910s and 1920s[39][40][41]

“Rosenwald schools[42]” are credited with dramatic improvements in educational gains[43] for Black children in the segregated Jim Crow South.

Local communities had to contribute funds and pledge to incorporate the schools into their own public school district. This funding model helped to ease worries about excessive donor influence.

The Ridgeley Rosenwald School, in Capitol Heights, Maryland, has operated as a museum since 2011. Nikki Kahn/The Washington Post via Getty Images[44]

It probably also helped that Rosenwald made his heirs spend down the Julius Rosenwald Fund, his foundation[45], after his death in 1932. Unlike the automotive entrepreneur and philanthropist Henry Ford[46] and other major donors, Rosenwald went out of his way to make sure his power wasn’t perpetual.

Surely, these examples aren’t the only possibilities. And each one comes with its own limitations. But in my view, further attention to the conflict between justice and democracy in philanthropic giving may uncover new and better ways of overcoming it.