Our repugnance at fruit and vegetables that fail to meet unblemished ideals[1] means up to half of all produce is thrown away[2]. Our distaste at anything other than certain choice cuts from certain animals means the same thing with cows[3] and other livestock slaughtered for food. As for eating things like insects – perfectly good in some cultures – forget about it.

Disgust has its advantages. Its origins likely lie in the basic survival benefit of avoiding anything that smells or tastes bad. But disgust may also be an impediment to many of us adopting more sustainable lifestyles[4] – from eating alternative sources of protein[5] to drinking recycled water[6].

Read more: Eating insects: good for you, good for the environment[7]

Can anything be done about this? The fact that disgust varies between cultures[8] and across ages[9] implies it can. But how?

We set out to answer this by getting a better grip on how disgust works, focusing on disgust in everyday food[10] choices, rather than aversions to the unknown or unfamiliar.

Our research suggests some disgust responses, once set early in childhood, are hard to shift. But responses involving culturally conditioned ideas of what is “natural” may be modified over time. 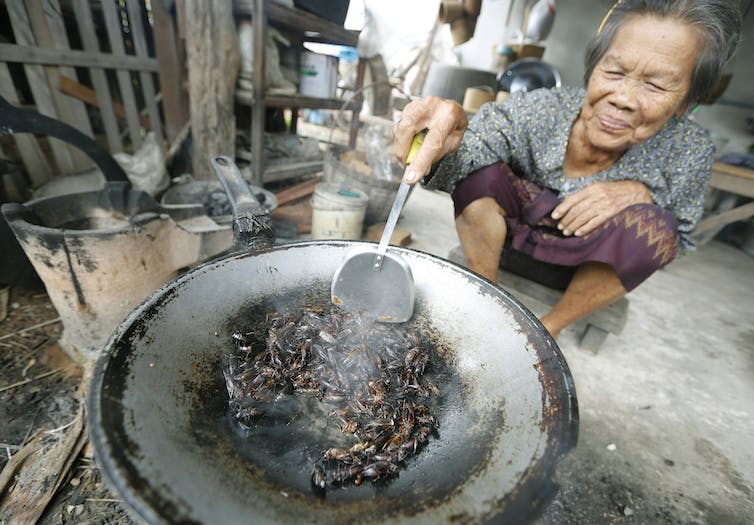 Cultural conditions: insects have long been on the menu in Thailand. Narong Sangnak/EPA

Disgust likely began as a powerful “basic” emotional reaction that evolved to steer us away from (and literally eject) potential contaminants – food that smelled and tasted bad. You can think of it as originally being a “don’t eat that” emotion.

The disgust system tends to be “conservative” – rejecting valid sources of possible nutrition that have characteristics implying they might be risky, and guiding us towards food choices that are ostensibly safer. Research by University of British Columbia psychologist Mark Schaller and colleagues suggests people who live in areas with historically high rates of disease not only have stricter food preparation rules but more “conservative” cultural traditions[11] generally.

Is is unclear exactly how or when individual templates for what is disgusting are set, but generally what is seen as “disgusting” is set relatively early in life. Culture, learning and development[12] all help shape disgust.

In our study[13], we showed 510 adults pairs of “normal” and “alternative” products via an online survey, and asked them how much they would be willing to pay for the alternatives. We also asked them to rate which product was tastier, healthier, more natural, visually appealing and nutritious. Product pairs included: 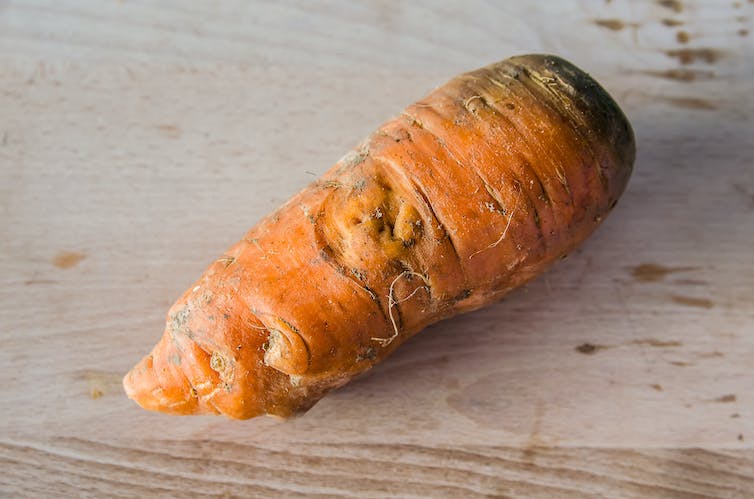 Out of shape: using common fruits and vegetables meant the study’s results were not muddied by responses affected by fear of the unknown. www.shutterstock.com

Our results show that, even after statistically adjusting for obvious factors like pro-environmental attitudes, those with a greater “disgust propensity” are less willing to consume atypical (weird-looking) products.

This may seem rather obvious but most prior studies have muddled a food’s “novelty” with its possible disgusting properties (by asking people, for example, whether they’d eat bugs). By asking about really common fruits and vegetables, our study shows just how far disgust may reach in influencing what we consume.

Read more: Neigh-sayers: why we won't agree to eat a dead horse[14]

As importantly, our results suggest evaluations of a product’s perceived naturalness, taste, health risk, and visual appeal “explains” about half of the disgust effect.

In particular, lack of perceived “naturalness” was a frequently reason for unwillingness to pay for product alternatives. This result was in line with previous studies that have looked attitudes to eating insects[15] or lab-grown meat[16]. This is a promising area for social marketing.

Given evidence about how much of what we consider disgusting is cultural and learned, marketing campaigns could help shift attitudes about what is “natural”. It has been done before. Consider this advertisement to naturalise sugar consumption.

Thinking differently about emotion-eliciting stimuli is termed “reappraisal”. Reappraisal has been shown to reduce disgust effects among those with obsessive compulsive disorder[17]. Desensitisation (repeated exposures) seems less effective in reducing disgust[18] (versus fear) among people with diagnosed phobias, but it may work better among the general population.

Read more: From disgust to deceit – a shorter path than you might think[19]

Of course, such speculations remain untested and their ultimate success remains unclear.

But it wasn’t so long ago that Western consumers turned their noses up at fermented foods, and the notion of “friendly bacteria” made as much sense as “friendly fire”. More than a decade ago the residents of a drought-stricken Australian town voted against recycling sewage for drinking water[20]. Now the residents of an Australian city accept recycled sewage being pumped[21] back into the city’s groundwater.

Given time, circumstance and a little nudging, a future meal at your favourite Thai restaurant may well involve ordering a plate of insects.